There’s a lot of backlash about the facet that the athletes are receiving no compensation to promote The Rock’s shoe collaboration with Under Armour. The shoes are not particularly pleasing – and this is from an Under Armour fan no less.

But with the fan backlash there’s been a lot of opportunities to remember the many times UFC has mistreated its athletes and basically tried to save cost.

Two sources reported on the injustice.

According to journalist John S. Nash:

“Asked around and not only are fighters not going to get paid anything to wear the shoes, the UFC is apparently requiring fighters do interviews with Johnson’s media company Seven Bucks.”

Asked around and not only are fighters not going to get paid anything to wear the shoes, the UFC is apparently requiring fighters do interviews with Johnson's media company Seven Bucks. 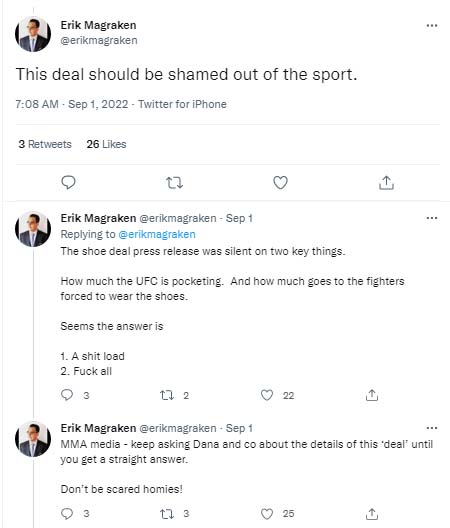 Back in December of 2021, Ariel Helwani  broke the story saying UFC will no longer cover UFC testing expenses:

“As of this weekend’s UFC card, fighters and corners will be responsible for paying for their own COVID testing expenses, I’m told. Up until this point, fighters and corners did a 10-day pre-departure test, domestically and internationally. That was paid for by the UFC. International fighters/corners went to labs, domestic fighters/corners were sent kits. As of this weekend, they are responsible to take and pay for the tests themselves.”

After this was uncovered the UFC backtracked fast. 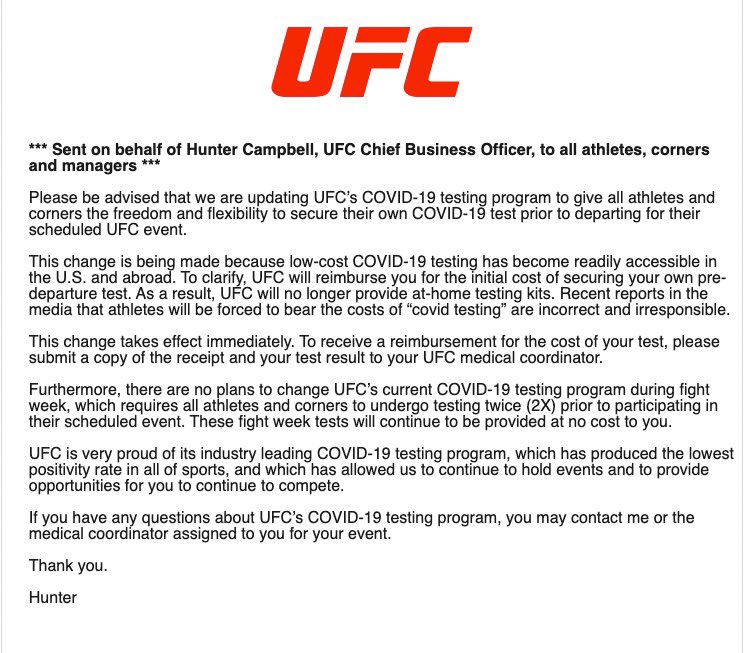 Helwani was quick to respond and point out that this was not always going to be the case.

“Absolutely nothing “irresponsible” or “inaccurate” about my report yesterday. I think proves that. I have physical proof of the then-change in policy. Alas, glad fighters don’t have to pay out of pocket anymore.”

UFC Reebok deal – in lieu of no longer being able to have their own sponsors, Reebok offers athletes 50% off on Reebok items 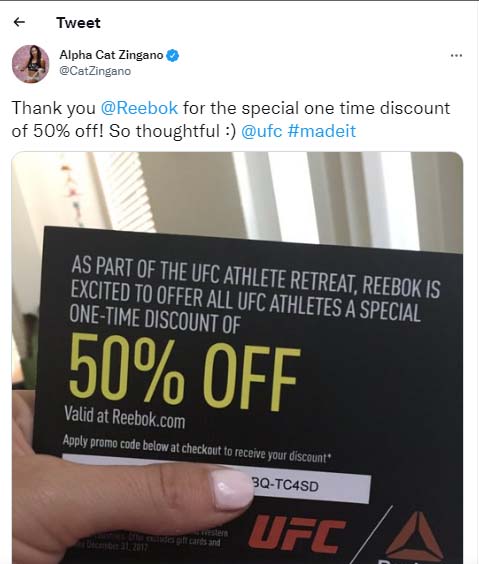 John Kavanagh posted images of himself and Johnny Walker exiting the T-Mobile Arena following his victory over Cutelaba.

At UFC 279, Johnny Walker defeated Ion Cutelaba by submission in the first round.

White was asked about the tweets – in fact it was the first question he got at the press conference and he seemed snide and evasive.

“Lenny just told me a little bit about it before we walked in here. I guess ever since COVID, they started this thing where they get the fighters right out of here. I don’t know why that happened or what happened. I mean, we’re not throwing Johnny Walker out in the street through.”

When confronted by the fact that Walker was indeed barefoot in the picture White replied:

“We f*cking threw him right out in the streets, huh?  Apparently. It’s rough around here.”

White is well aware of this policy. In fact he approved Molly McCann to watch Pimblett’s event from his section back at UFC London.

Ian Machado Garry had to buy a ticket to his own event at MSG in the past.

Paul Felder might be happy commentating for the UFC now but back in 2016 he had to crowd fund just to get his team to his event.

He was booked to face Francisco Trinaldo. UFC does not cover the cost of all the cornermen – just a single one per athlete (which is why the cards are often stacked with athletes from the same team so each can take one).

“As most of you guys know, I’m getting ready to go over to Brasilia, Brazil, Francisco Trinaldo’s hometown,” Felder explains in the video posted to his GoFundMe page.

“I gotta get my corner of there. The UFC can only cover so many flights. I’ve got a few other cornermen that I’ve gotta bring with me because they’re important to our victory. So if you guys want to help me get this win, we’re asking that you donate whatever you can–just a little bit. It’s just to get my cornermen over there, not for personal gain. It’s to get guys to Brazil so we can get this W and come back home to the United States victorious.”

Jon Jones tests positive for PEDS, Card moves from Vegas to LA with Dana White not intending to reimburse athletes for high taxes

Jon Jones has long been troubled by PED use allegations and for a good reason. When he tested Positive ahead of the 2nd clash against Gustafsson the company moved the etnire card from Vegas to LA. Many of the athletes  were very displeased they were made to pay for Jones’ mistake.

When Dana White was asked if UFC would be compensating the athletes for high tax rates due to the last second change of location he responded: